BEHOLD THE…. It’s not the time yet… We’re just SO excited to tell you about the coming events in Azeroth! Prepare a cup of tea or some snacks – it’ll be a fascinating thing to hear!

There is a new, freshly published video from Blizzard! Game director Ion Hazzikostas announced the next epic update for Battle for Azeroth, and it’s called the “Visions of N’Zoth”. So, are you willing to know more about the new 8.3 update? Here’s what we know so far for sure.

In the next Battle for Azeroth update, you will encounter the Old God, who will fall upon Azeroth with all his might and engrossing madness. The Old God is located in Ny’alotha, as well as all his endless army of darkness. This place is not located somewhere far away – it’s located everywhere, but in the other dimension.

The “capital” of the Old Gods and their minions is not somewhere far away, but among us, in the other world, from which the ordinary world is protected only by a thin veil. N’Zoth tries to break this line and release the powers of the Old God – terrifying nightmares and dark visions – into our world.

N’Zoth wants to destroy the titanic laboratories located in different parts of the Azeroth. These structures can help the mortals and immortals to find the key to the main answer the planet will soon face: What can kill and stop the Old God forever? The servants of N’Zoth began attacking the titanic laboratories, and you, as a champion of Azeroth, must get into the dark world through void portals, left by the servants of N’Zoth. It’s time to fight the madness on its own territory!

You will face a familiar type of content – assaults, during which the armies of the Old God will attack some places of Azeroth. When such an assault begins, there’s a HUGE invasion of N’Zoth’s minions all over the place. There will be lots of different opponents, tasks, and mini-events. And of course (for those of you, who still remember the Box of Yogg-Saron) there will be additional puzzles and treasures!

Some places, like Uldum or Vale of Eternal Blossoms (it’s now in its original, ‘healthy’ state – it has healed its wounds after the Pandaria’s crisis), will be under the constant assault of the Black Empire. The Vale will be extremely important to the servants of the Old God because Pandaria has its techniques in terms of… madness retention.

These Visions will take place in Stormwind and Orgrimmar. You will have an option for a single run if you want a “horror-like” challenge, or you can invite your friends if you prefer a standard 5-man adventure. Blizzard presents such content as an alternative to the Mage Tower in Legion, so you will probably hone your skills and eventually get to the most interesting and delicious rewards.

Your first visit to the terrifying vision will be short – your mind won’t be able to withstand N’Zoth’s whispers for too long. But you will return multiple times, and each time you will be stronger and more skilled.

If you continue your journey in the dark vision while your mind gets tired, you will face different… oddities and weirdness. You will lose your mind and soul bit by bit. At a critical mind strain, you will be forced to retreat – otherwise you’ll surrender to Black Empire and become one of its eternal defenders.

In new content, you’ll get different void fragments. You can take them to Magni for further analysis and study, that will give you new abilities… This new character upgrade system will be called “titanium research”.

Wrathion will help you in your journeys. Together with the Black Prince, you’ll create your new legendary cloak (just like in Pandaria), which will protect your mind (and brain) from the Old God influence.

Wearing such a legendary item will allow you to delve into the maddening visions even further, receive new items and rewards.

Maybe, you’ll even find some information about the weaknesses of N’Zoth…

The Waking City… We’ve been waiting for so long to witness it. Now it is real – you can see the true might of the Black Empire! The final battle for the sanity of the world you know will be there. BEHOLD THE MIGHT OF THE BLACK EMPIRE!

In an 8.3 update, BFA Season 4 will begin. Alongside with the new PvP season, there will be a new seasonal modifier for Mythic Keystones – the “Corrupted”.

Obelisks of the Black Empire (with which you can interact) will appear in the dungeons: when you use them, you’ll move to the dark reality, where you’ll find the servant of the Old God. When you kill him or her, get back to our reality – but you can “get out” in the place you want. If you ignore the obelisks, then all the dark servants will meet you on the last boss of this dungeon. Such a mechanic will allow you to skip some dungeon sections but will require additional planning beforehand. 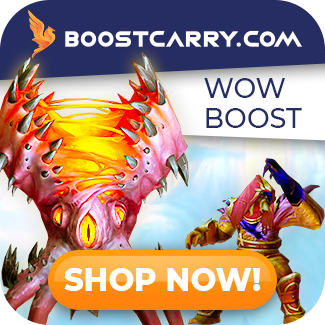